Hydraform’s Earthquake-Resistant Building System has been successful in the earthquake-stricken regions of Argentina and India. In Argentina, the conventional Hydraform blocks were used in a reinforced concrete frame which tied the walls, foundation and roof together, providing seismic resistance. In India, a slightly modified Hydraform block allowed vertical reinforcement around windows and doors – a revision which has achieved proven results.

In partnership with Wits University, Hydraform performed extensive seismic testing on seven structures, culminating in a final set of full simulated earthquake signals (chosen from well-known historical earthquakes: El Centro, Northridge and Llolleo) applied to the seventh structure. After the structures had been subjected to four such signals, run in sequence, negligible damage was evident.

Report – Experimental Earthquake Loading of a Full Scale Dry Stacked Masonry Structure (written and produced for the web by Dr. A. Elvin and Dr. N. Elvin) 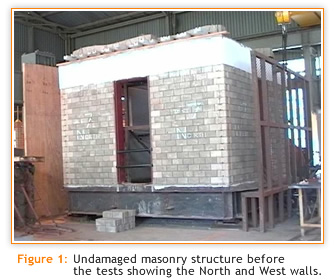 Earthquake simulations were conducted on a full scale, dry stacked, masonry structure made out of Hydraform bricks (Figure 1).

Three earthquakes were considered:
a. The elCentro.
b. The North Ridge.
c. the Llolleo.

The filtering proved to be essential for two reasons:
a.To remove drift in the displacements.
b.Facilitate the testing with the equipment available.

The filtering has little to no effect on the structure tested since the masonry structure has a resonant frequency of approximately (a) 5Hz for the undamaged and (b) 3Hz for the damaged (or softened) structure.
The response spectra for the three earthquakes, both filtered and unfiltered were computed. These spectra were compared to specific case design response spectra calculated from UBC97. At the higher frequencies both the filtered and unfiltered response spectra showed very similar behaviour. At lower frequencies, the unfiltered accelerations produced somewhat higher responses. This is to be expected since a high pass filtering was applied (the low frequency content was reduced or eliminated). When compared to the case design spectra, the three studied earthquakes were higher at the high frequencies (low periods) and thus the tests conducted are conservative; at the low frequencies (high periods), the studied earthquakes were lower than the design spectra and thus unconservative. The undamaged test structure resonant period is 0.2 seconds, the damaged structure’s resonance is approximately 0.33 seconds; at both these periods the applied earthquakes are well above the case design response spectra

The earthquake tests, using the filtered displacement signals, were conducted one at a time in the following order:

As can be seen the structure in the videos is a full scale, single room, 4x4meter one story dry stacked masonry structure (see also Figure 1 above). The structure was constructed out of interlocking Hydraform bricks. A small ring beam was cast at the top of the walls. The videos show that the simulated Llolleo earthquakes caused the most damage. This damage was minor and estimated to be EMS Grade 2. The damage was in the form of: several bricks cracking, some bricks shifting and vertical gaps opening up between the bricks, and the skim plaster spalling in several places. The instrumentation showed that there were permanent out of the wall plane displacements. But once again, these were minor—much smaller than the thickness of the wall. During the test, out of the wall plane deflections could be up to 40mm. The other earthquakes produced even less damage; estimated to be EMS Grade 1.

A full report on these tests, written by Dr A. Elvin and Dr N. Elvin, can be obtained from Hydraform.